The Fantasia on a Theme of Hindemith composed by James D’Angelo is on track 12. It can be found under Music for Keyboard Instruments. The CD can be purchased from Gothic Records (G49309). 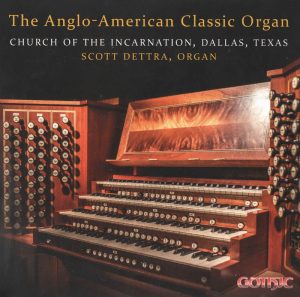 While organ recital discs abound, ones that are exceptional rather than merely good are rare. Here is one of those proverbial hen’s teeth examples with uniformly excellent repertoire intelligently chosen, superbly performed by a gifted interpreter on a first-rate instrument, and splendidly recorded and documented. Back in 42:1 I previously reviewed Scott Dettra as an equally skilled choir director in a disc devoted to an Anglican service of choral Evensong. Here Dettra—whose positions (all at Episcopal churches) before coming to the Church of the Incarnation in Dallas included such prestigious appointments as Trinity Church in Princeton, St. Mark’s Locust St. in Philadelphia, and St. Paul’s K Street and the National Cathedral, both in Washington, DC—issues his first solo organ recording, after accompanying or directing choirs in about 20 previous releases on various labels. I can only shake my head in bafflement that it took so long for him to be granted this privilege: Dettra is an organist with both impeccable musical taste and dazzling technique to burn. The Persichetti and D’Angelo works in particular present daunting technical challenges, which Dettra seemingly dispatches without turning even a hair.

Dettra opens with a transcription of Wagner’s Prelude to Die Meistersinger, in one of the many Wagner transcriptions made by the famed organ virtuoso Edwin Lemare. In reviewing a previous recording or two of this work on the organ, I have had occasion to complain of a lack of clarity in articulation of rhythmic motifs or instrumental lines. Here, everything is rendered with absolutely crystalline clarity, and with such an array of instrumental coloration in the stops as to bear comparison with Wagner’s original. The four Leipzig chorales that follow are played with a superb vitality and deep spiritual profundity that completely eschew the plodding slogs and mechanical metrical stiffness that so often plague second-rate Bach performances. The complete Dryden Liturgical Suite of Vincent Persichetti—Dettra recorded just the opening Prelude and closing Toccata on the aforementioned choral Evensong CD—reveals once again what an under-rated and -performed master composer that Philadelphian was. Laid out in five movements—Prelude, Response, Psalm, Prayer, and Toccata—it abounds in colorful dissonances that never belie its essentially tonal character. Interestingly, its thematic materials and driving, motoric rhythms are strongly redolent of Hindemith; and so the inclusion of the Fantasia by James D’Angelo (b. 1939), which shares a similar slant to its musical materials and is equally winsome (D’Angelo wrote his Ph.D. dissertation on Hindemith), makes for an especially apt coupling. Contrast is provided by the quieter, contemplative Prière of the Belgian master Joseph Jongen, while the finely crafted neo-Bachian Prelude and  Fugue in C Minor of the English/Canadian master Healey Willan brings the program full circle to a wonderfully satisfying close.

While none of the recordings is stated to be a world premiere, I can find no preceding versions of the Persichetti or D’Angelo pieces, and by a narrow margin I would give the palm in the Willan to Dettra over the very fine rendition that Patrick Wedd recorded for Naxos. Gothic has captured Dettra and his instrument in vivid, clear, opulent sound. The booklet for the slimline cardboard trifold case provides intelligent notes on the pieces and the Aeolian-Skinner organ of Dettra’s home parish, complete specifications for the instrument, numerous color photos, and an artist bio. This is a veritable model of what an organ recital disc should be; let’s hope that Gothic and Dettra have a long and productive artistic relationship with one another. Urgently recommended to all music lovers, not just organ mavens. James A. Altena

Five stars: An extraordinary organ recital by a brilliant organist.