Fast Cats and Mysterious Cows on Virgin Classics and released in 1999 is a potpourri of vocal and instrumental music featuring American Boychoir, sopranos Catherine King and Patricia Petibon, and the recorder player, Rebecca Prosser. It is given over to music by Copland, Bernstein, Barber, Rorem and D’Angelo. The composer’s contribution to this album are two movements from his suite for solo flute or recorder entitled Three Portraits of Krishna, on track 9 The Loves of Krishna and track 24 The Dance of Krishna. The movements are set in the modal scales found in the music of India. Extracts from these two movements can be heard under Music for Woodwinds. The rather unusual title of the recording was chosen by one of the boy choristers referring to words in the songs. This CD is widely available. 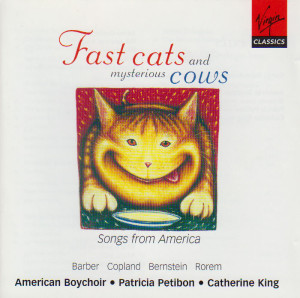 This latest release from the Princeton-based American Boychoir is a charming, infectious collection of American songs delivered in lovely choral arrangements or pearly, pure solo renditions by Patricia Petibon and Catherine King, both voices that, in their clarity and slender size, complement the boys’ singing eloquently.

Appropriately, for one of the country’s top boy choirs, the theme of childhood and its innocence runs through the disc, from Copland’s saucy “Old American Songs” to Ned Rorem’s “The Mysterious Cat” from his “What is Pink? Six Songs” collection.

The choir, under the direction of James Litton, delivers its usual pristine performance, with immaculately articulated notes and words. Petibon, in Samuel Barber’s “Melodies passageres”, sings the languid melodies with a clear spinning balance. James D’Angelo’s “The Loves of Krishna” is a surprisingly soulful work for recorder (played by Rebecca Prosser) and piano (played directly on its strings with percussion mallets). In another set by Barber and in Malcolm Bruno’s “Ondine”, mezzo-soprano King offers singing that is chiselled and firm.

Loving, exacting performances and the imagination of this recording speak well for the creative current running through this important American choir, its director Litton and collaborators.